Women who have shaped the art world. 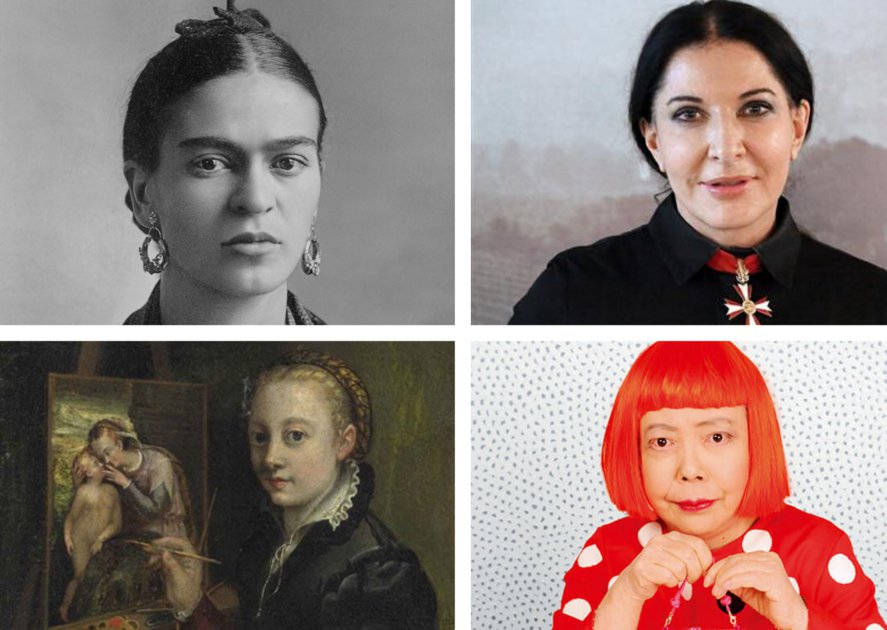 Art history is full with names of great men like Picasso and Van Gogh, but what about the women who have helped shape the world's visual history?

We want to use this year's International Women's Day to tell you more about four strong and influential women in art history.

Get inspired by our power women artist quartet who changed the art world.

Probably one of the most iconic artists of the 20th century is the Mexican painter Frida Kahlo. She is admired for her complex self-portraits that deal with topics of identity, suffering and the human body.

Kahlo was involved in a traumatic bus accident at the age of 18 in which she was seriously injured and confined to a bed for months. During her slow recovery, she took up painting from the bed and then gave up her academic activities to work as an artist.

We can still feel the influence of Frida Kahlo today, her endless recreation and layering of her own identity was an essential precursor of identity politics and continues to inspire artists today.

Our second power woman is the Japanese artist Yayoi Kusama. Also known as the "queen of polka dots", Kusama is considered as one of the best-selling female artists of the 21st century.

It is nearly impossible to classify Kusama in a single artistic category. Throughout her long career, she has worked in painting, collage, scat sculpture, performance art and environmental installations. Kusama was involved in Pop Art, Minimalism and feminist art movements even before these movements became famous.

We genuinely recommend you not to miss the exhibition of her infinity rooms at Tate Modern that will open in May 2020.

Another power woman that we like to introduce is the Serbian performance artist Marina Abramović.

Her artworks explore the relationship between artist and audience, the limits of the body, and the possibilities of the mind.

Did you know that she once performed "The Artist is Present" for 736 hours and 30 minutes long? She stayed silent and sitting motionless in the atrium of the MoMA while the audience was invited to sit opposite her in turn. Over the course of nearly three months, for eight hours a day, she met the gaze of 1,000 strangers, many of whom were moved to tears.

Sofonisba Anguissola was a late Renaissance painter best known for her portraiture. She was one of the first known female artists and one of the first women artists who established an international reputation for herself.

Anguissola was born into a noble family who supported her to learn painting together with her five sisters. It quickly became obvious that she adept at portraiture. Her numerous self-portraits show the daily activities of a noblewoman of her rank like reading, playing musical instruments or painting.

The four of them have much more in common than just their gender; they are true legends that have shaped the history of art in their unique way. Today, on International Women's Day, we should celebrate and recognize the social, economic, cultural and political achievements of women across the world.